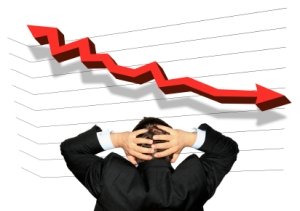 Your ability to deal constructively and effectively with mistakes and temporary setbacks is a mental skill that you can learn and become proficient at. The best way to deal with any failure is to realize that it is an indispensable prerequisite for success. You have to treat failure as an opportunity to lean, and begin again. You can overcome the fear of failure by doing the things you fear over and over again, and then resolve to bounce back, rather than letting them break you when things don’t go right.

The fear of failure is the greatest single obstacle to success for most people. It is the fear of failure that causes people to see the world in negative terms and creates obstacles in their own mind that don’t exist in reality. The fear of failure can be so strong that most people give up before they even begin because of fear that they will loose their time, money, or emotions in a new venture or relationship. Many people today operate at levels of effectiveness far below their capabilities because of the overwhelming effect of this fear.

The starting point in overcoming the fear of failure is to realize that it is impossible to achieve success of any kind without failure. Mistakes are opportunities to learn something new, something you did not know before. The more mistakes you make, the more you will learn. There is even a bit of magic hidden in every mistake. So the more mistakes you make, the more magic you will have in your life.

Virtually all men and women of high achievement have been great failures throughout much their lives. Thomas Edison failed in thousands of experiments to develop synthetic rubber, the light bulb, new plant species, and hundreds of other breakthroughs that eventually changed our entire world.

Levi Strauss headed for the gold fields of California to strike it rich in mining. However, he failed as miner, so the began sewing pants out of canvas for miners who were successful. Today, I think most of the world has heard of Levi’s jeans.

Christopher Columbus was looking for a trade route to China and made the mistake of accidentally bumping into America, the richest, most powerful country in the world.

When you make a mistake, it is important that you accept it. Believe it or not, studies have shown that most people fail on average 70 percent of the time. Some people more and others less.

Successful people prosper in life is because of their tendency to cut their losses thereby minimizing their mistakes. It is only when a person refuses to accept that they have made a bad choice or decision and prolong it, that a mistake becomes extremely expensive and hurtful to his or her future. The inability or unwillingness to face the fact that you are not perfect, that you have made bad choices and decisions that have turned into mistakes, is a major source of stress.

This is why the quality of “intellectual honesty” is one of the most respected qualities in a person, especially leaders. When you are intellectually honest, you will look at the world and deal with your circumstances as facts and realities, rather than hoping, wishing, and praying that they would or could be different. The minute you begin to deal straightforwardly with life, you will become a far more positive, creative, and constructive person.

There is a lesson in every mistake. That is why you must learn from every mistake you make. Making mistakes is the way we were all designed to learn. If we fail to make mistakes, or make them and do not learn from them, the magic goes out of life. Life goes backward and gets smaller, instead of expansive and filled with magic. Whenever we make a mistake, we often become upset. And being upset is our maker’s way of telling us that we need to learn something. It is a tap on our shoulder saying, “Pay attention. You have something important to learn.” If we lie, blame, justify, or deny the upset, we will waste the precious gem of wisdom that is in every mistake.

When you make a mistake one of the first things you should do is to define the problem or mistake clearly. Then, ask yourself, What happened, or what is the problem that needs to be solved? Then write it down. When you write the problem down on paper, you’ll be able see it more clearly. You’ll then be able to understand it better and it will be easier for you to find a solution.

Then you should define all the possible causes of the mistake or problem. Ask yourself, How did this happen? Why did it happen? What were the critical variables, that caused the problem or mistake?

After you have defined the problem clearly in writing and all the possible causes, then you need to identify all the possible solutions, or ways of dealing with it. Ask yourself, What are all the different things that I could do to minimize the cost of the mistake, or to solve the problem that has arisen? The more ideas you have, the more likely it is that you will come up with an idea, or combination of ideas, that will solve the problem or correct the mistake.

Successful people do not make the right decisions all the time. Rather, successful people make their decisions right. Many of the decisions you make and conclusions you come to in life, will eventually prove wrong. It is how you deal these situations that will determine your success or failure.

Life is a continuous succession of problems and mistakes. But it is not what happens to you, but how you react to what happens to you that makes all the difference in your life. You have within you, the ability to learn from every mistake, to extract every valuable lesson that is contained in every difficulty, situation, or challenge that you face. You have the intelligence to turn every stumbling block into a stepping stone, or springboard toward higher achievement.

Mistakes and problems are good. Without them there would be no opportunities for success or greatness. If there are no problems to solve, then there are no possibilities for success and achievement. If you want to be successful, you must take every difficulty and challenge that life throws at you, accept it as an inevitable part of the growing experience, and then turn it to your advantage in every way possible. Almost every mistake you make contains a hidden treasure that you can take and apply to your future to make your life into something extraordinary and worthwhile. And when you become a master at learning and growing from the inevitable mistakes you make, your future will become unlimited.